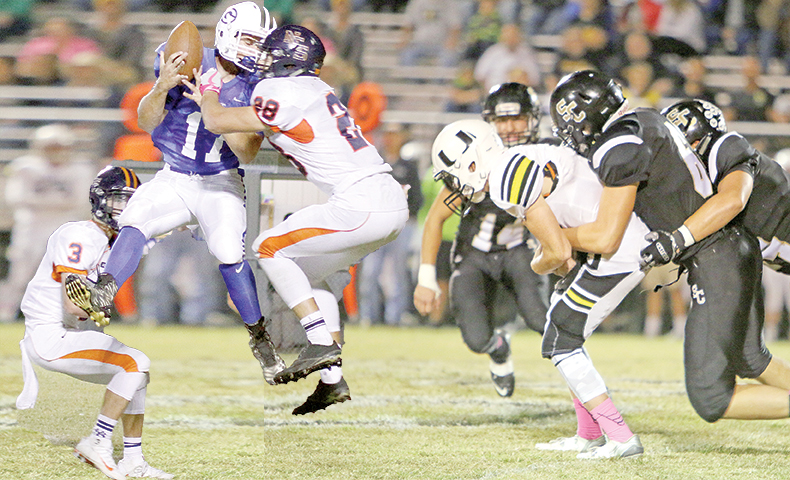 The Smith Co. High Owls’ football team grabbed a key Region 4-3A victory with a 15-13 win over Upperman last Friday night at Owl Stadium in Carthage. The Owls will need one victory in their final two region games in order to secure a playoff spot while two Owls wins in that stretch could vault them to third place in the region and potentially as high as second. Points after touchdowns proved to be the difference in the contest as both teams tallied two scores each with Smith Co. scoring three points after their touchdowns on a Jaylon Shepperson two-point run and a Zach Culbreath PAT kick. Upperman, meanwhile, tallied but one point after their two scores with a 1-of-2 effort in PAT tries. The Owls improved to 4-4 overall and 2-2 in Region 4-3A play while the Bees saw an 11-game winning streak vs. district or region opponents broken to fall to 4-4 overall and 3-1 inside the region.

Last Friday night’s Region 5-1A showdown at Turney Ford Field was for the region’s #1 spot. The Nashville Christian Eagles claimed the win and the top spot in a dominating 40-7 victory over the Gordonsville High Tigers football team. “Sometimes you just do not have enough bullets in the gun,” said Gordonsville head football coach Ron Marshall, “What I mean by that is, they had a lot of weapons. At times defensively, we were able to stop them and other times they busted big plays on us and that is what they are. They are a big play ball club.” Nashville Christian created big plays throughout the ball game. The Eagles had three scoring plays of 50-plus yards including their first score of the game — a 61-yard run by Lelan Wilhoite. On the Eagles second possession, running back Xavier Myers took his first touch of the ballgame 83 yards for the second Nashville Christian touchdown. Gordonsville found themselves in a 14-0 hole with 5:22 still remaining in the first quarter. The Tigers relinquished two more touchdowns. A blocked extra point by Gordonsville made the Eagles’ lead 27-0 heading into halftime. Nashville Christian lit up the stat sheet in the first half gaining 272 yards of total offense. The Tiger offense was caged and could only muster 40 yards of first half offense.