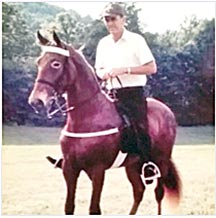 Mr. Harry Sullins age 68, a carpenter of Baxter, died at 11:50 p.m. Tuesday evening October 3, 2017 at the Cookeville Regional Medical Center as the result of an apparent stroke.

He was a 1967 graduate of Upperman High School in Baxter.

He was an avid horseman and enjoyed working with walking horses and farming and was a member of the Horseback Riders Club.

This notice provided as a courtesy to the Sullins family.