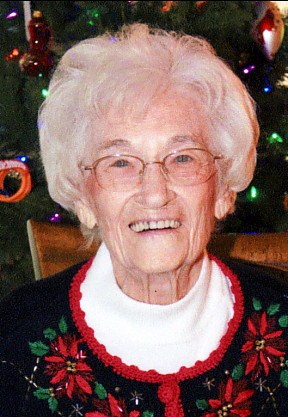 A Carthage centenarian, Mrs. Clellie Butler, died at the age of 103 years, 9 months and 7 days at the Arbors of Willow Springs in Spring Hill, Tennessee at 11:52 a.m. Saturday morning May 26, 2018 following a period of declining health.

Her pastor, Monica Mowdy, officiated at the 3 p.m. Monday afternoon May 28th funeral services from the Carthage Chapel of Sanderson Funeral Home. Burial followed beside her husband in the Garden of Gethsemane at Smith County Memorial Gardens.

A sister, Ina Mundy Sircy preceded Mrs. Clellie in death at the age of 95 on February 28, 2018 and a special needs brother, Oliver Benton (Bent) Mundy Jr. died at the age of 71 on April 3, 1997. She was also preceded in death by two other brothers, William Mundy and Ernest Mundy.

She was united in marriage on February 6, 1931 to Kempville Community native the late Ernest Hautry Butler who preceded her in death on March 26, 1997 at the age of 85.

Mrs. Clellie was also a member of the Carthage Family and Community Education (F.C.E.) club.

For forty two years she was a well-known Main Street Carthage store clerk and for twenty five years was employed by the late Frank Hire at his Hire and Jent Department Store and after Billy and Ella Lee Piper purchased the business she worked for them for seventeen years, a career that spanned from 1948 until her retirement at the age of 76 in 1990 with forty two years of devoted employment to the two businesses.

The Butler family requests memorials to the Carthage United Methodist Church or the charity of your choice.