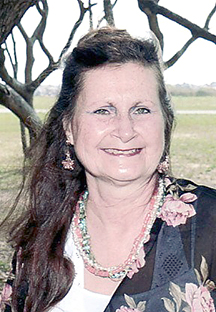 Mrs. Ellen Foote Johnson was surrounded by all her family when the death angel summoned her home.

Bro. Scott Nesbitt and Bro. Bryan Bratcher officiated at the 11 a.m. Monday September 3rd Labor Day graveside services. Burial followed in the Garden of the Cross beside the father of her children, Douglas Roger Foote, who died March 12, 2008 at the age of 56.

A Celebration of Life was conducted at The Building on Third Avenue West in Carthage at 2 p.m. Monday afternoon.

Mrs. Johnson was born Ellen Adele Palmroos in Binghamton in Broome County, New York on March 10, 1954 and was one of two children born to the late Alex Aino and Ruth Riley Palmroos.

On December 9, 2009 she was united in marriage to Roger Alan Johnson.

Mrs. Johnson, a non-denominational Christian, was a 1962 graduate of Chenango Valley High School in Binghamton.