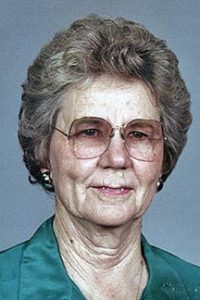 Funeral services were conducted on Sunday afternoon December 15th at 1 p.m. from the Ligon & Bobo Funeral Home in Lebanon. Stan Stevenson, minister of the Adams Avenue Church of Christ in Lebanon, officiated at the services. Burial followed beside her husband in the Wilson County Memorial Gardens.

One of five children of the late General F. Hall, an Army veteran of World War I who died at the age of 73 on June 27, 1969 and Ava Pearl Moore Hall, she was born Thelma Hall in Hartford in Geneva County, Alabama on June 28, 1925.

On June 22, 1946 she was united in marriage to Smith County native Walter Leon Massey who preceded her in death on April 28, 2000 following 53 years of marriage.

Mrs. Massey was preceded in death by a granddaughter, Melinda Ann Reynolds, who died at the age of 36 on September 28, 2001.

Also preceding her in death was a brother and three sisters.

Mrs. Massey was a member of the Highland Heights Church of Christ in Lebanon.