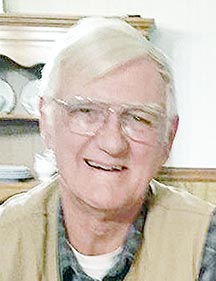 Mr. Bruce Parr, a Vietnam Veteran, died following a battle with cancer at the Tennova Healthcare in Lebanon at 8:50 a.m. Saturday morning February 18, 2017 where he was admitted February 16th. Mr. Parr was 72.

His pastor, Bro. Jeff Patterson, officiated at the Tuesday afternoon February 21st funeral services from the Carthage Chapel of Sanderson Funeral Home. A eulogy was delivered by Barry Rice with the Vietnam Veterans group. Following the 1 p.m. services burial with military honors was in the Defeated Creek Memorial Gardens.

One of three sons of the late John Mays Parr Sr. and Gertrude Ruth Lane Parr, he was born Bruce Elden Parr in Roanoke, Virginia on December 1, 1944.

He was preceded in death by his two brothers, Jack Parr and Harry Parr.

On November 29, 1968 at the Defeated Creek Missionary Baptist Church in the Difficult Community, he was united in marriage to Defeated Creek Community native the former Brenda Ann Green. The ceremony was performed by then pastor Eld. Arnett Gregory.

Bruce and Brenda met while he was stationed at Sewart Air Force Base in Smyrna and she was employed by the Life and Casualty Insurance Co. in Nashville.

He graduated in 1962 from Fork Union Military Academy in Fork Union in Fluvanna County, Virginia near Weber City, VA.

After graduation and a year of college he was inducted into the United States Navy in Roanoke, VA on September 15, 1964.

His total overseas service during the Vietnam Conflict was one year, four months, and four days where he served with the 62nd Tactical Airlift Squadron as an Aircraft Mechanic and Aircraft Electrical Repairman. He was honorably discharged with the rank of Sargent on September 13, 1968 and was relieved from reserve status on September 14, 1970.

Mr. Parr retired in 2001 from the Nissan Plant in Smyrna with over twenty years of service as a Maintenance Mechanic.

Mr. Parr was a devoted member and deacon of the Friendship Primitive Baptist Church in the Defeated Creek Community.

The family requests memorials to either the Friendship Primitive Baptist Church or the Smith County Cancer Fund.