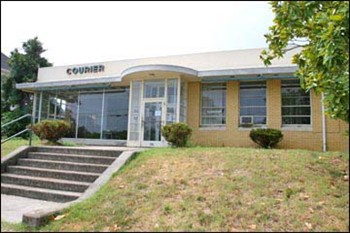 On July 3, 1913, Jere Gardenhire came out with the first edition of The Carthage Courier. The owners then purchased a lot on the corner of 3rd Ave. and Main Street, formerly occupied by the Ed Myer General Merchandise Store, and erected the Courier Building. Publication began here in 1917.

Also, in 1917, Gardenhire’s longtime friend and business associate, Fred Myers, went into partnership in the Courier. For 22 years they worked together, building a strong little newspaper with a healthy mix of local, state and national news.

Through Gardenhire and Myers, Smith Countians kept up with the activities of Favorite Son Cordell Hull and read about the first political endeavors of Albert Gore, Sr. (Today’s Courier readers continue to follow the political history of Hometown Son and former Vice-President of the United States Al Gore, Jr.)

According to Smith County History editors, when they were succeeded by Sam K. Neal and Florian E. (Sandy) Wood as owners of the Courier, Neal and Wood heaped praises upon their predecessors and vowed not to change a thing. In their opening edition of August 3, 1939, the new editors and publishers concluded their introductory editorial, simply, “we want to keep it your newspaper.”

They did. Between them, Neal and Wood brought 25 years of newspaper experience to the Courier.

In the April 4, 1946 issue, Andy Reid was noted as having bought interest in the Courier. This announcement heralded the partnership under which the Courier flourished for twenty-three years.

Sam Neal died in 1969 and Andy Reid followed in 1975. Their widows and children continued publishing until 1976 when selling to Alabama native Hershel Lake, who continued as owner of The Carthage Courier for the next 38 years, until his passing in 2014.

Under Lake, the Courier moved out of the old building at 3rd and Main to its present location in the old Upper Cumberland Electric Membership Corporation office on Main Street.

From 1976 to 1984 Lake managed the paper as owner and publisher and his wife, Gerrie, served as bookkeeper and assisted with business operations before they moved to Pulaski, Tennessee, where they continued to manage other newspaper, printing and radio holdings.

Under the continuous ownership of the Lake family, three men have held the title of publisher of The Courier. John “Buddy” Murchison was publisher from 1984 into 1985. Murchison was followed by Mitchell S. “Stony” Merriman, Ed.D., who published from February until December 1986.

For the past 35 years, Scott Winfree has been publisher of The Courier. Winfree was named to that position in January 1987 after joining the company in June 1985 as advertising manager.

The Carthage Courier continues to be a strong weekly newspaper dedicated to presenting the local Smith County, Tennessee, news to its readership. This has included a couple of landmark production changes in the past few years — beginning with the introduction of process (full color) printing that first appeared on the front page of the March 22, 2001 issue followed by the launch of the Courier’s initial website in August 2007: www.carthagecourier.com.