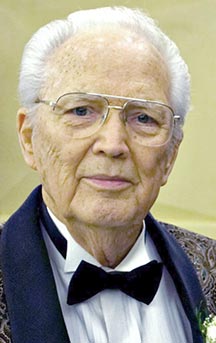 At a young age Dr. Coble enlisted in the US Army to fight in WWII.  He was Commanding Officer of A Company 185 Infantry and Executive Officer Heavy Weapons Company 31st Infantry Regiment in the Philippines. This would not be the last time Dr. Coble saw battle, he was called again to serve in the Korean War, where he became Commanding Officer of Heavy Tank Company, 7th Infantry Regiment, 3rd Division.  He was awarded the Silver Star, Bronze Star, Purple Heart, Two Presidential Unit Citations, and achieved the rank of Captain.

Dr. Coble served numerous churches as Minister of Music beginning with First Baptist Church of Center, TX; Park Place Baptist Church of Houston, TX; First Baptist Church of Lebanon, TN; In 1972 he was called to Cumberland University where he served as Chairman of the Music Department and Director of Choral Activities, a position he held until 1988.  It was then he started a wonderful tradition that would make a great impact on the community.  Dr. Coble began hosting annual Christmas dinner shows with his choir the Bert Coble Singers, to raise money for such charities as the American Cancer Society and the American Heart Association.  This tradition continues today with the choir being under the leadership of Ms. Jennifer Perry, one of Dr. Coble’s former students.  The funds from these dinner shows have generated hundreds of thousands of dollars since its conception.  While Dr. Coble was at Cumberland University he worked part time in the following churches leading their music ministries; First United Methodist of Lebanon, TN; Brook Hollow Baptist Church of Nashville, TN; First United Methodist Church of Hermitage, TN; and Carthage First United Methodist of Carthage, TN.

Funeral services will be conducted on Friday March 17, 2017 at 6:00pm from First Baptist Church in Lebanon, TN (227 East Main St. Lebanon, TN 37087) with Dr. Frank Lewis and Jim Eastin officiating.  Visitation with the family will be on Thursday March 16, 2017 from 3:00pm until 8:00pm in Baird Chapel at Cumberland University and again on Friday from 4:30pm until services at 6:00pm at First Baptist Church, Lebanon.  A family burial will take place on Saturday in Ridgecrest Cemetery in Jackson, TN.  In Lieu of Flowers, memorial contributions may be made to the Bert Coble Endowed Music Scholarship at Cumberland University.

This notice provided as a courtesy to the Coble Family.