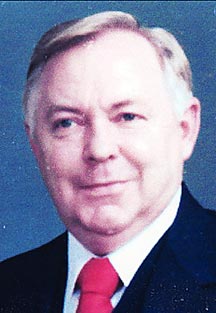 Mr. Chester Blankenship, age 83 of the Tanglewood Community died at 3:15 a.m. Wednesday morning March 22, 2017 at the Knollwood Manor in Lafayette where he was admitted January 19th of this year following a period of declining health. Mr. Blankenship lost his vision at the age of 67.

His step-son Eld. Rickey Hall officiated at the 1 p.m. Friday afternoon March 24th funeral services from the Carthage Chapel of Sanderson Funeral Home. Burial followed in the Garden of the Cross at Smith County Memorial Gardens.

Born Chester Patterson Blankenship in the Galen Community of Macon County on April 15, 1933, he was one of four daughters and two sons of the late Carlos Benjamin and Opalle Ethola Dotson Blankenship.

On December 10, 1984 in Lafayette he was united in marriage to the former Shirley Jean Sircy, a Carthage native. The ceremony was performed by Eld. Charles Allen Gentry.

A brother, Orville Blankenship, preceded him in death.

Mr. Blankenship was a 1951 graduate of Macon County High School.

He was former owner and operator of the A & B Grocery Store in Lafayette before joining the Kenneth O. Lester Wholesale Food Distributors in Lebanon as a route salesman. He retired from there at the age of 66 with over thirty three years of service.

At the age of 12 under the pastorate of the late Eld. L. A. “Luther” Stewart he was saved and was baptized into the full fellowship of the Antioch Missionary Baptist Church.

At the time of his death he was a member of the North Gordonsville Missionary Baptist Church where he had transferred his membership by letter.

The Hall family requests memorials to either the North Gordonsville Missionary Baptist Church or the Jordan Hackett Foundation.