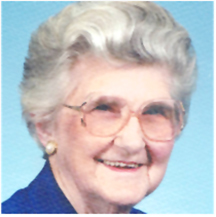 Mrs. McDonald was born May 18, 1918 in Elmwood, TN, the daughter of the late Thomas Bransford Harrison and Bessie Mae Gibbs. She married Sam King McDonald on July 28, 1935 and he preceded her in death on February 26, 1995 after 59 years of marriage. She was also preceded by Son; Glenn McDonald, Sr, Son-in-Law; Paul E. Hackett, and Brother; Milton Harrison. Mrs. Christine and her husband had owned the S.K. McDonald Store, a grocery store in Chestnut Mound. She was a member of the Chestnut Mound Missionary Baptist Church.

Visitation with the McDonald family was held at the Carthage Chapel of Bass Funeral Homes on Tuesday from 12 Noon until service time at 3PM.

In lieu of flowers, the McDonald Family requests memorials in Mrs. Christine’s memory be made to the Chestnut Mound Missionary Baptist Church.