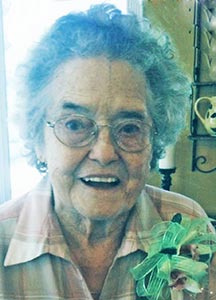 Mrs. Pauline Kittrell, age 98 was called to her Heavenly Father’s home by her Lord and Savior at 2:40 a.m. Tuesday morning May 2, 2017 at the Macon County General Hospital.

She was preceded in death by two siblings, her older sister Velma Estelle Hall West Walker and her younger brother, Vernon Hollis Hall who died October 3, 2006 at the age of 76.

Among all the things on this earth, the most precious was the gift of salvation she received at the age of 21, while praying to the Lord. She was later baptized into the full fellowship of the Defeated Creek Missionary Baptist Church on September 22, 1940. As long as health permitted she attended faithfully, often shouting in joy from the blessings received when the Lord saved her soul and in anticipation of what was to come when she stepped off on that beautiful shore.

There was never a better daughter, wife, mother, grandmother or neighbor than Mrs. Kittrell. She had an iron clad sense of mortality which had been gleaned from a good foundation provided by wonderful parents, hard work and painful trials in life, joyful times and prayer. She was a quiet strength to her family, standing with them in times of need, and often imparting wisdom, guiding them down the rights paths in their life’s journey.

In 1994 she left the family farm and moved to the Rocky Mound Community in Western Macon County to be near her two sons and grandchildren, and quickly became an ingrained member of the community where she was loving known as “Granny Kittrell” by all.