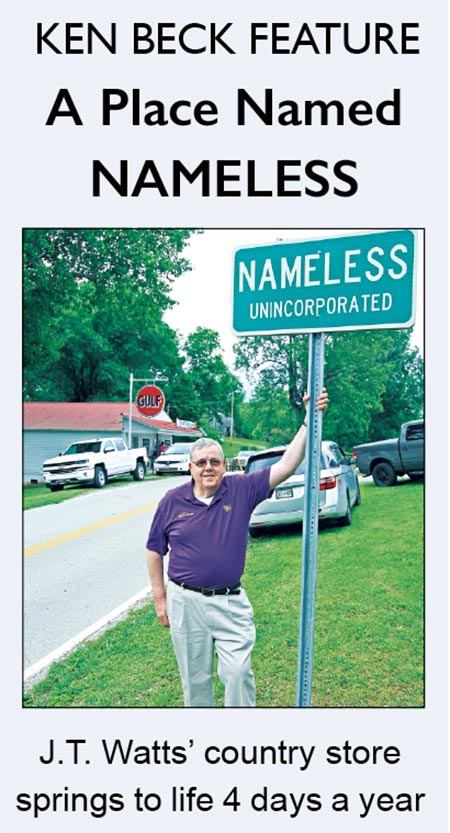 The Nameless store is not without a name. Across seven decades, folks around these parts of Jackson County have known it as J.T. Watts General Merchandise.

The store closed in 1978, but since 2005 the front door swings open four days a year, and neighbors as well as strangers are welcomed inside for a poor country boy’s feast of Moon Pies, baloney and cheese on crackers and Coca-Cola in six-ounce glass bottles.
Welcome to Tennessee’s gently hopped-up version of Brigadoon, that mythical village in the Scottish Highlands that remains unchanged and invisible to outsiders but for one enchanted day every 100 years.

Davis Watts proves to be the genial wizard behind the magical four days a year in Nameless, a village that rests on a ridge along Highway 290.

His late parents, Virginia, aka Miss Jennie, and J.T. (Thurman) Watts owned and operated the store from 1953 until 1978.

It sat dormant for the next 26 years.

“I restored it back in 2004 and have been having these reunions since about 2005,” said Davis, senior vice president of First Tennessee Bank in Cookeville.

“The store was the center of the community. I did it to honor my mother and dad and my late sister, Hilda.”