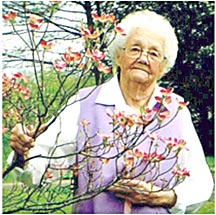 Mrs. Ethel Jones Huddleston, age 95, of the of Silver Point, TN, and formerly of the Wolf Creek Community of Dekalb County, TN, passed away Tuesday, July 11, 2017.

Funeral services for Mrs. Huddleston were conducted from the Gordonsville Chapel of Bass Funeral Homes on Friday, July 14, 2017, at 1PM with Rev. Herb Leftwich and Rev. Tony Crow officiating. Interment followed in the Gordonsville Cemetery.

Visitation with the Huddleston Family was at the Gordonsville Chapel of Bass Funeral Homes on Thursday from 4PM until 8PM and on Friday from 10AM until service time at 1PM.

The Huddleston Family requests donations in Mrs. Ethel’s memory be made to Avalon Hospice.