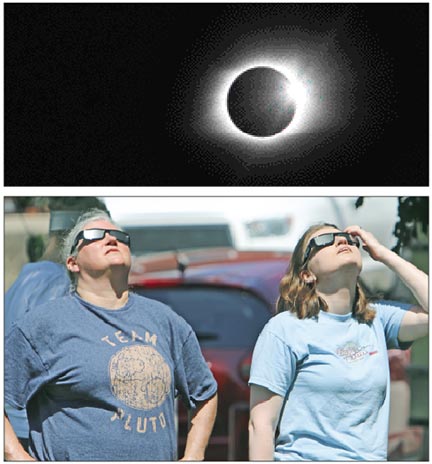 With a mainly clear sky Monday, Mother Nature put on a spectacle as the sky went black.

During the two plus minutes of totality shortly before 1:30 p.m., it became so dark in Carthage street lights came on.

There was a noticeable calm as there was little traffic.

The temperature dipped slightly and at least one star was visible.

Residents and visitors, both nationally and international, experienced Monday’s Great American Eclipse without any major problems.

Local officials were concerned about a high volume of traffic.

Motorists filtered in and out of the county without any significant traffic build up.

There was a report of slow traffic on Interstate 40 late Monday afternoon.

Shortly after the eclipse, a two vehicle wreck occurred in the New Middleton community.