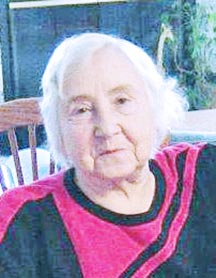 Mrs. Sadie Farley Wooten Klatt, Michigan and a Smith County native died Tuesday morning August 22, 2017 at the age of 92 at the Rainbow Point AFC under the care of Mid-Michigan Hospice.

Eld. Charles Allen Gentry officiated at the graveside services which were conducted Saturday afternoon August 26th at 1 p.m. Burial followed beside her first husband and the father of her children in the Ridgewood Cemetery.

They were preceded in death by a daughter, Sharon Raye Wooten Harriman who died at the age of 33 on March 27, 1983.

Mrs. Farley-Klatt was a member of the Baptist Church in Clare.

She was a retired punch press operator in the automotive industry in Michigan.