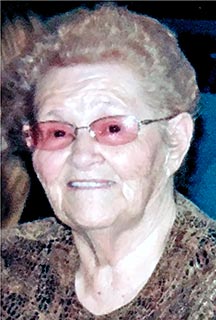 Mrs. Malone was born May 17, 1932 in Wytheville, VA, the daughter of the late Walter Lee Stoots and Nina Susie Ayers. She married Fred Edward Malone, Jr. on October 10, 1947 and he preceded her in death on February 1, 1985. Mrs. Ethel was also preceded in death by Son; Fred Darrell Malone, Sr. on August 28, 2011, Daughter; Sandra K. “Mickey” Ray on December 5, 2011, Grandson; Shannon Woodard on June 14, 1994, and eight siblings. She worked at the Carthage Shirt Factory and Robertshaw. Mrs. Malone was a founding member of Living Water Ministries in Gordonsville, TN.

Funeral Services for Mrs. Malone are scheduled to be conducted from the Living Water Ministries on Monday, January 15, 2018 at 11AM with Bro. Bobby Peoples, Bishop Richard Blackburn, and Rev. Bill Woodard officiating. Interment will follow in the Gordonsville Cemetery with Rev. Kevin Blackburn officiating.

Visitation with the Malone family will be held at the Gordonsville Chapel of Bass Funeral Homes on Sunday from 1PM until 8PM and at Living Water Ministries on Monday after 9AM until the time of the service at 11AM.