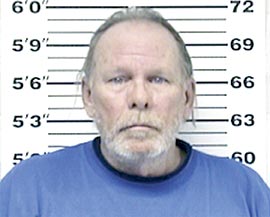 Two sheriff’s department deputies made a large marijuana find after responding to a 911 hang up call in the Brush Creek community. Sgt. Jimmy Lankford and Deputy Nathan Williams were dispatched to the Rural Academy Lane on Saturday, February 3 in response to a 911 hang up call. Upon arrival, the officers were told by an individual that a man identified as George Black was asked to leave the residence.

According to an offense report filed by Sgt. Lankford, “Black was gathering some of his belongings”, after he had been asked to leave the residence, when he pulled a knife. A resident of the house disarmed Black while officers were en route to the scene, according to the officer’s report. During a search of the property, officers located a large amount of marijuana, along with hash and drug paraphernalia, according to Sgt. Lankford’s report.