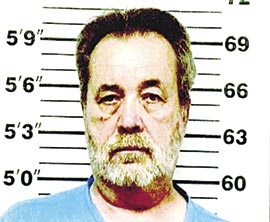 A man who is charged with taking payments for screen printing but failing to produce any merchandise was being held in the county jail without bond, Monday. Gregory Keith Oxendine, 60, Lebanon, faces 12 counts of theft and failure to appear in court charges in a case which dates back to 2015. Oxendine was released from the Wilson County Jail and transported to the Smith County Jail on February 4 on the failure to appear.