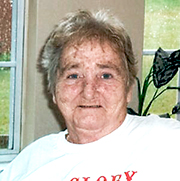 Mrs. Peggy Newsom, of the Kempville Community, died at the age of 70 on Thursday morning May 3, 2018 at her home following an extended illness.

Funeral services from the Anderson and Son Funeral Home in Red Boiling Springs were conducted Saturday afternoon May 5th at 2 p.m. Bro., Steve Waller officiated and burial followed in the King Family Cemetery in the Smith County section of the Funns Branch Community.

Born Peggy Franklin in Smith County on October 18, 1947, she was one of five children of the late Charlie “Charm” and Mary Bell Maynard Franklin.

Mrs. Newsom was a former factory worker and worked on many family farms during the tobacco season and especially enjoyed having fun while helping neighbors strip tobacco.

This notice provided as a courtesy to the Newsom family.