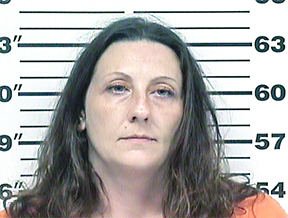 A woman faces charges after allegedly sending drug-laced mail to an inmate at the county jail. Samantha M. Belcher, 38, Crossville, was charged with five counts of introduction of contraband into penal institute.

Belcher was charged on Monday of last week.

According to Sheriff Steve Hopper, Belcher allegedly sent post cards laced with meth to an inmate at the county jail.