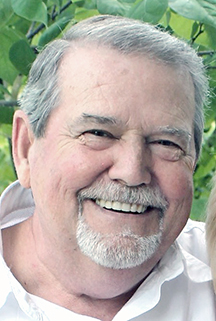 Larry Lee Sutton, age 70, passed peacefully in his sleep Monday morning, August 20, 2018, in his home in Hickman Tennessee.  He was the much-loved and admired husband of Jeanene Speck-Sutton and Dad to children, Shauna Sutton Morris (Bryan), Daryl Sutton (Heidi), Matt Thompson (Angel), Jon Thompson (Chrys) and Cassie Thompson Laidlaw (Eric).  To the greatest and most precious loves of his life, his twelve grandchildren, Will Morris, Cadee Morris, Colby Sutton, Kyle Sutton, Cooper Sutton, Kamden Sutton, Caleb Thompson, Mercy Thompson, Aedyn Thompson, Ryleigh Thompson, Kinsley Thompson, and Analiese Laidlaw, he was Poppy, the bringer of all things good in the form of cake, cookies and candy. He slipped the occasional five-dollar bill into small sticky hands and was known as the supplier of contraband chewing gum in spite of parents’ wishes to the contrary.  Larry was big brother to and is survived by, William R. Sutton (Tamara) and Beverly Ann Sutton Jones (Alvin), along with many nieces and nephews. He was preceded in death by his father, Raymond L. Sutton and mother, Betty L. Barker Sutton. He also leaves behind his cats who he dearly loved, much to the shock and awe of those closest to him, a Himalayan named Reddington and a Maine Coon named, Dembe Zuma.

Larry was a Civil Engineering Tech for the U.S. Army Corps of Engineers at Center Hill Lake, where he leaves behind coworkers who were like family to him. He earned many awards and commendations during his time there however he would have considered his greatest achievement to be that he earned the respect and admiration of his friends and coworkers.  He loved Jesus and expressed that in so many ways throughout his life. He was a member of Joy Church in Mt. Juliet TN.  He was originally from Missouri but came to love Tennessee, its people and its beautiful landscapes. It became home to him in a very short time.  Larry never met a stranger and was quick with a smile and a story. He had a passion for 60s muscle cars and could spot a barn find from a mile away. He could tell you in a glance the year make and model of most every vehicle he ever saw. In his lifetime he owned well over 100 cars, many of which he enjoyed restoring himself. If given half a chance, he would gladly give you the complete and exhaustive oral history of each and every one if he ran into you at Walmart or Aldis.

He was known to his family and many friends as a man who loved to eat and loved to feed everyone. He could be found most weekends on his back deck with a meat fork in his hand manning the smoker or during the week standing at the stove at work cooking breakfast for anyone who would eat.  Everyone who ever stepped across his threshold was treated to a run down of all the food available in the house and was fed within an inch of their life at the earliest opportunity. Aside from being happiest while eating, cooking or spending time with his grandchildren eating or cooking, he loved junking.  He spent almost all of his free time saling…that is yard saling for the uninformed.  For Larry, yard saling was elevated to the level of an olympic sport and he gold medalled in it weekly by being the best at spotting a deaI and picking up “high-dollar” (his words) treasures for a fraction of their value. While Larry was not a singer or a musician, he loved his bluegrass music mixed with a little southern gospel. He was a man of integrity who kept us all on the straight and narrow and his life was a shining example of that.  His life touched so many others and they were all changed or challenged by his love, his care and his expectations of us all to rise above our differences, the petty and the mundane and to just do what was right.  He was proud of all we did and we are proud of who he was as a husband, a father, a grandfather, a Christian and a friend. While our loss is great and we are all broken-hearted, so devastated and lost without him, we are not without hope because we know we will be with him again someday with the Lord.