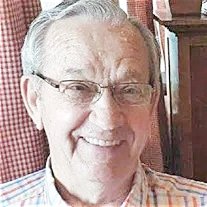 Mr. Lancaster was born in Lancaster, TN, March 29, 1942 to the late Robert James Lancaster and Otha Murray Lancaster. He was also preceded in death by his Sister; Anna Sue Lancaster and Brother; Robert “Bob” A. Lancaster.

John retired in 2015 after 38 years of service with the Tennessee Department of Revenue. He was an avid deer hunter and loved fishing at his most beloved place, Sebowisha in Lancaster, TN where he grew up and was raised by his grandparents; Vinnie and Robert S. Lancaster with his siblings and cousin Jimmie Harper who he loved liked a brother. He was an outstanding athlete and excelled in Football, Basketball, and Baseball at Gordonsville High School where he was named Most Valuable Player for the class of 1960. John was also a non-resident member of the New Middleton Baptist Church.

In addition to his careers, John enjoyed coaching baseball, helping with his son’s Boy Scout troop, and cheering on his daughter’s sports. He was very proud of his contribution to the Smith County Community by being a Deputy Sheriff, alongside his brothers; Tom Lancaster and Bob Lancaster and Uncle; Sherriff Sidney Harper and cherished Aunt Susie Lancaster Harper who were significant influences throughout his life.

Funeral Services for Mr. Lancaster are scheduled to be conducted from the Gordonsville Chapel of Bass Funeral Homes on Saturday, November 17, 2018 at 1PM with Bro. Doug Dillard officiating. Interment will follow in the Gordonsville Cemetery.

Visitation with the Lancaster Family will be at the Gordonsville Chapel of Bass Funeral Homes on Friday from 4PM until 7PM and on Saturday after 11AM until service time at 1PM.

In lieu of flowers, the Lancaster Family requests memorials in John’s memory be made to the Gordonsville High School Football Fieldhouse Project.