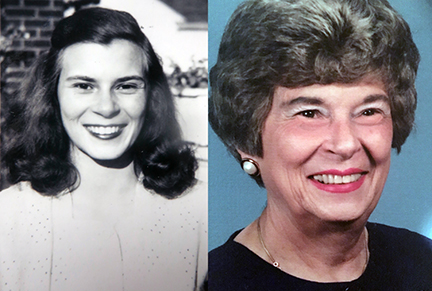 Sue Maggart Petty of Carthage peacefully departed this life surrounded by her family and friends at home on December 1, 2018.

Sue married O.M. Maggart, Jr. in 1947, and together they had two sons and operated a trucking company. As a young mother, Sue was totally devoted to her children. She was there everyday. Warm, tolerant, loving, and forgiving, she offered uplifting support through good times and bad. She had nerves of steel and unsurpassed determination. After O.M. passed away in 1966, she became employed by the U.S. Postal Service in Carthage. She worked her way up to postmaster of the Gordonsville office from which she retired in 1995.

Sue had a passion for genealogy and everything historical in Smith County. She coedited with Nina Sutton and contributed numerous sections to the reference book History of Smith County, Tennessee, published December 30, 1986. It contains over 800 pages providing a thorough history of the county and many of the families that have roots there. A reference point for many, it reflects years of research and is one of the most sought-after books on the the history of Smith County. It has been sold out for years.

In 1998 Sue authored The History of Carthage United Methodist Church, a congregation of which she was a longtime member and historian. Her book covers the history of the church from the time John Wesley was ordained deacon of the Church of England in 1725 through its publishing date. It highlights past pastors, church families, and other members.

Sue was also a very active member of the Smith County Historical and Genealogical Society. From 1989 until 2006 she edited the work of others, wrote many articles, and typed and “published” on her personal xerox machine 16 volumes of the society’s quarterly newsletter.

Other works of Sue’s include Smith County Cemeteries South of the Cumberland River (Key, C.; Maggart, S.; Turner, J.) and Smith County Marriages 1881-1920 (Maggart, S.; Sharenberger, L.), along with many other smaller books. She also did extensive research and writing on several Smith County families from whom she was descended or related. The volume of this material is overwhelming.

Another major project Sue championed was the preservation, abstracting, and indexing of hundreds of ancient Smith County court records. She led a host of volunteer historians who spent countless hours unfolding, reading, and abstracting as much information as possible from these old forgotten documents. The beautiful product of their labor is protected in the county archives at the old courthouse. In Spring of 2018, the archive office was named in Sue’s honor. Sue was also one of the original organizers of the Smith County Museum, which houses artifacts documenting the county’s history.

Sue served two terms as Regent of the Caney Fork chapter of the Daughters of the American Revolution (DAR). She was also an officer of the United States Daughters of 1812 and a member of the Colonial Dames of Virginia. As a DAR she was involved in decorating and preserving grave sites including that of William Walton.

She was the Smith County Historian for many years. One of her final accomplishments was the placement of the Cordell Hull Bridge on the National Registry of Historic Places. This, coupled with political efforts on multiple levels, resulted in the saving and reconstruction of the bridge, preserving this historic architecture we take for granted every day.

The Maggart family wishes to acknowledge with deepest appreciation those who enriched the life of our mother, Sue Maggart Petty, especially in her final years. First, her loving husband of 20 years, Dr. Gordon Petty, who was her constant companion and fellow life traveller. Together they saw the four corners of the earth and then some. Next, Jo Sponaugle, caregiver and wonderful friend; Marian Cothern, loving “daughter;” Chris and Connie Baxter and Pert and Ralph Underwood, her final bridge club; Sam Petty and family, who were always there; and Richard Rutherford, M.D., her doctor.

Sue was a beautiful person with a radiant and unforgettable smile. She will be forever missed.

A celebration of Sue’s life will be held on Monday, December 3rd, at Carthage United Methodist Church at 11:00am. Interment will follow in the Ridgewood Cemetery.

A receiving of friends will be held at the Carthage Chapel of Bass Funeral Home on Sunday, December 2nd, from 3:00 to 7:00pm and the following morning, Monday, December 3rd, at Carthage United Methodist Church from 10:00 to 11:00am.

In lieu of flowers, donations in memory of Sue may be made to the Daughters of the American Revolution or the Smith County Historical Society.