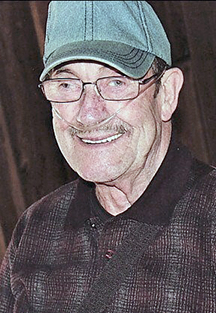 Mr. Kenneth Perdue, age 78 of South Carthage, died at 9:09 p.m. Tuesday evening January 8, 2019. He was admitted December 31st to the Summit Medical Center in Hermitage being treated for C.O.P.D.
​ A gathering of the family and friends was held on Saturday afternoon January 12th from 2 until 4 p.m. at the Carthage Chapel of Sanderson Funeral Home. A grand son-in-law, David Donegan, delivered the eulogy. Mr. Perdue will be memorialized in the Rose Garden at Smith County Memorial Gardens.
​ He was born Ralph Kenneth Perdue in Madison, Tn in Metro Nashville on June 12, 1940 and was the sixth of nine children of the late Vernon Wesley Perdue and Emma Merritt Perdue.
​ Seven siblings preceded him in death: John L. Sullivan, Bonnie Owens, Esley Perdue, Dorothy Gayle Wright, James W Perdue, Dewey Ray Perdue and Barbara Perdue Taylor.
​ On January 30, 1984 in Springfield in Robertson County, he was united in marriage to Rome Community native, the former Mattie Virginia “Ginnie” Moore.
​ They were preceded in death by a son, James Pardue who died December 31, 2017 at the age of 54, by a granddaughter, Crystal Beaty, who died at the age of 26 on April 20, 2012 and by a great-grandson, Noah Donegan, who died at birth on August 30, 2017.
​ Mr. Perdue was of the Missionary Baptist faith.
​ He was a retired security chief for the State of Tennessee, a position he occupied from 1982 until his retirement in 2005.
​ Mr. Perdue proudly served our country during the Vietnam conflict with the United States Army and was inducted in Nashville on October 25, 1961 and was honorably discharged at Fort Rucker, Alabama with four years, four months and four days of service.

On May 19, 1962 the City of Charlotte, North Carolina presented him with a citizenship award for his willingness and unselfish service with the United States Army during the 1961 Berlin Crisis.
​ Surviving in addition to his wife Ginnie of almost thirty five years is a daughter, Rebecca Parman and fiancée Kenneth Norman of Lebanon and a son, Dewey Wayne Perdue and wife Marcia of Murfreesboro; four step-children, Tonya Rushing and husband Greg of Carthage,