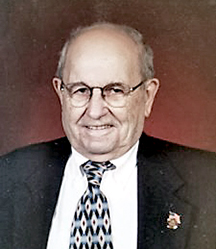 Mr. James “Jim” Panipinto of Mt. Juliet and a longtime resident of Jacksonville, Florida died at the age of 96 at 9:54 a.m. Sunday morning January 20, 2019 at the Carrick Glen Senior Living Center in Mt. Juliet where he had made his home since November 7, 2017. He was under the tender care of Kindred Hospice.

Mr. Panipinto was at the Carthage Chapel of Sanderson Funeral Home and was transferred to the Hardage-Giddens Funeral Home on San Jose Boulevard in Jacksonville, Florida on Wednesday morning January 23rd.

His funeral services were conducted Monday morning January 28th at 10 a.m. from the Lakeshore Presbyterian Church. Burial followed in the Riverside Memorial Park in Jacksonville.

Born James Joseph Panipinto on January 1, 1923 in Luke, Maryland, he was one of five children and the only son of Sicilian parents, the late Cruciano “Louie” and Colegero “Mary” Panipinto and was reared in New York.

He was also preceded in death by two sisters, Antonia and Jeanette.

Mr. Panipinto proudly served our country with both the United States Army Air Corp and the United States Navy. It was while in the service at a U.S.O. dance in Florida that he met the love of his life, the former Helen Houghton and they were married in 1946.

For the next sixty years he would make his home in Jacksonville, where together he and Helen reared their three children.

He relocated to Tennessee in 2008 after the death of his wife to be near family in Mt. Juliet.

His life post military was a thirty year career at NAS in Jacksonville.

For over fifty years he was a member of the Lake Shore Presbyterian Church where he served as an Elder and Deacon.

He loved his Sunday school class and especially enjoyed the salt and pepper group.

He was a perpetual active member of the Hyde Park Masonic Lodge where he was a member until his relocation to Tennessee. In 1990 he served the chapter as Worshipful Master.

Following retirement his favorite hobby was applying his woodworking ability and many hours was spent in his home shop making a range of useful items for his family and included toys for his grandchildren and great grandson, all of whom he loved and adored.

The family requests memorials to the charity of choice.