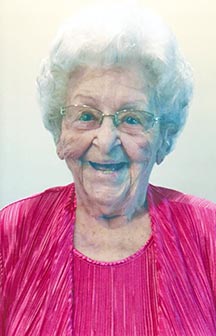 Mrs. Estilene Anderson Dilleha, age 99 years, 6 months and 12 days died peacefully in her sleep and was pronounced deceased at 6:48 a.m. Tuesday morning February 19, 2019 at the Knollwood Manor in Lafayette where she was convalescing from a fractured hip suffered on January 22nd. She had previously suffered a non-debilitating stroke on October 10, 2018.

Funeral services from the Hackett Chapel of Sanderson Funeral Home were conducted at 1 p.m. on Saturday afternoon February 23rd by her pastor, Bro. Bryan Bratcher and her niece, Carthage attorney Robin Givens Moore delivered the eulogy. Burial followed beside her first husband in the Defeated Creek Memorial Gardens.

On September 24, 1938 she was united in marriage to Defeated Creek Community native Bobbie Lee (Bob) Anderson who died at the age of 78 on November 21, 1995.

After the death of Mr. Anderson, Mrs. Estilene was married on March 25, 2003 to Clyde Beasley Dilleha, a Defeated Creek Community native who had lost his wife and the mother of his children, Laura Marie Stacey Dilleha on September 10, 2002.

Mrs. Dilleha was a charter member of the Kempville Chapel Old Time Methodist Church where she remained a faithful member until death.

She began employment with the Hackett Chapel of Sanderson Funeral Home on July 1, 1984 as an attendant and was employed there until the death of her sister Lois in 1990 when she then transferred to the Carthage Chapel and retired completely on October 12, 2005.

Mrs. Dilleha was skilled at making quilts and loved vegetable gardening and her flower gardens.

For many years she and Mr. Anderson made their home on East Buffalo Road farm and following his death she constructed a new home in Kempville across the highway from the funeral home.

A while after she and Mr. Clyde married they sold the Kempville home and relocated to the Bloomington Springs Community of Putnam County.

Following his death she sold that home and moved to Pin Oak apartments in Carthage where she resided as long as health permitted.

Surviving is her only surviving sister-in-law and no brothers-in-law, Mildred Swann Hackett of Gallatin; her three step-children who adored her, Judy Dilleha Formosa of Cross Plains, Betsye Dilleha Thomas and husband Daniel of The Rock Bridge Community in Sumner County, Marty Dilleha and wife Angela of Cookeville, her caregiver who had seen to her every need, Vickie Mundy Givens and husband Ricky of the Buffalo Community.

The Dilleha family had requested memorials to the Kempville Old Time Methodist Church.