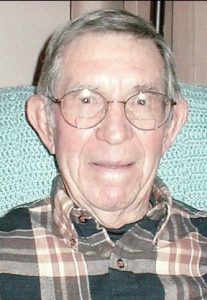 Mr. Gene Terry of Lebanon and a longtime resident of Mt. Juliet died at 8 p.m. Friday evening February 22, 2019 at the Sumner Regional Medical Center in Gallatin where he was admitted earlier that day suffering from sepsis.
Graveside services were conducted on Tuesday afternoon at 1 p.m. with his pastor, Rev. Vicki Burgess officiating. Burial followed beside his mother in the West Section at Dixon Springs Cemetery.
Born Harold Eugene Terry in the Dixon Springs Community on March 22, 1925, he was one of two sons of the late Dallas Arnold Terry who died November 9, 1945 at the age of 43 and the late Madge William Terry Pool who died June 8, 1998 at the age of 90.
His only sibling, James Wendell Terry, died January 20, 2019 at the age of 88 in San Antonio, Texas.
Mr. Terry was a communicant of the St. Phillips Episcopal Church on Fairway Drive in Donelson.
He retired from the Tennessee Farm Bureau in in 1987 where he had thirty two years as a claims adjuster.
A 1943 graduate of Smith County High School, he was Vice-President of the junior class, a member of the junior rotary club in ’40, ’41 & ’42, was a member of the Owls football team his freshman and sophomore years and was a member of the Owls basketball team his sophomore, junior and senior years.
In 1947 he graduated from the Tennessee Polytechnic Institute in Cookeville, now Tennessee Technological University, with a Bachelor of Science degree in agriculture.
He is survived by a niece and nephew and his caregiver, Gail Callas of Lebanon and by a first cousin, Christine Allen Woodard, a longtime resident of Carthage and who now resides in Knoxville.