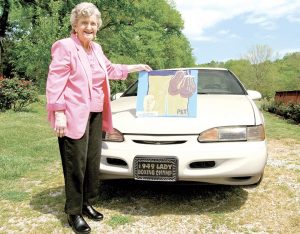 Pat Emerick Lancaster Landreth, who says her greatest feat was seeing all 15 of her children graduate from Gordonsville High School, enters a class of her own this summer — the International Women’s Boxing Hall of Fame’s class of 2019. She will be inducted into the hall of fame Aug. 30 at the Double Tree Hotel, in Brisbane, Calif., 10 miles north of San Francisco.

Landreth, who grew up in South Bend, Ind., lost her very first bout but went on to win 18 consecutive matches before retiring. In November 1949 she fought JoAnn Hagan (Verhaegen) for the Ladies World Boxing championship in Council Bluffs, Iowa, where she captured the title. Landreth, who turned 88 years old on Tuesday, Feb. 26, recalled, “It was a six-round match, and she wouldn’t come out for the fourth round.

She said, ‘I’m not going back out there.’ I won by a TKO. It was wonderful.” Asked for her reaction when she got the phone call telling her the big news, Landreth said, “I just sat there. My daughter was taping it [the call] and said, ‘Aren’t you excited?’ and I said, ‘Well, it’s about time.’ I was very excited, very excited.