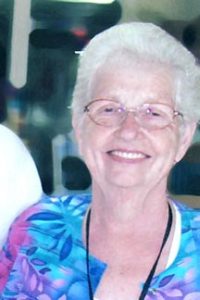 A community minded and very caring lady, for her family and those with whom she came in contact in her daily walks of life has died at the age of 80 following a brief illness.

Mrs. Juanita Hawthorne Harville, a longtime resident of the Maggart Community, was pronounced deceased at 10:55 a.m. Tuesday morning February 26, 2019 at the Concordia Nursing and Rehabilitation Center in Carthage where she had made her home since August 7, 2018.

The youngest of thirteen children, she was born Juanita Ruth Hawthorne in Hartsville in Trousdale County on July 14, 1938 and was the daughter of the late Eii James Thomas Hawthorne and Ruth Irene Mundy. Mrs. Ruth, at the age of 16, and Mr. Tom, at the age of 26, were married on February 25, 1915.

She was also preceded in death by a great-great-granddaughter, Sharli Joy Sandlin-Thompson who died at birth on April 19, 2018.

On September 1, 1956 she was united in marriage to Maggart Community native Robert Harris Harville who died February 6, 2004 at the age of 68.

Mrs. Harville was a 1956 graduate of Smith County High School where she was a member of the Girl’s Hobby Club, Glee, Chorus and F.H.A. Club.

In the early sixties she was a member of the Melody Trio which included herself, Sharon Barnes, Mike and Sue Harville and Larry Butler.

She had a long career as a caterer serving food at Mr. Gene Carman Auctions, at other sporting venues, anywhere she thought a hungry crowd would assemble. She was masterful at making fried pies and other homemade goodies.

She was active at the Forks River Elementary School where her two children attended and she was a substitute teacher, a 4-H leader, Den Mother of her son’s Cub Scout Troop and a leader in her daughter’s Girl Scout Troop.

For several years she was a volunteer in the activities department at the former Kindred Health Care in Carthage.

While health permitted she attended the Dillards Creek Community Church.