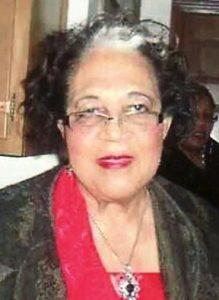 Mrs. O’Geal Carter, a loving mother to seven children and a friend to all who knew her and even to strangers, went to her heavenly home on Tuesday evening February 26, 2019 at the Concordia Health and Rehabilitation Center in Carthage where she had made her home since March 31, 2017. The 89 year old Mrs. Carter was pronounced deceased at 10:10 p.m. by Kindred Hospice of Cookeville.

A Service of Remembrance to celebrate her life was conducted on Monday afternoon March 4th at 1 p.m. from the Carthage Chapel of Sanderson Funeral Home. Burial followed beside her husband in the Garden of Peace at Smith County Memorial Gardens. Her son-in-law, the Rev. Dr. Harry Spigner, was the officiant assisted by her pastor Rev. Jerry Payne.

Mrs. Carter was educated in Smith County Schools and was a recipient of her General Education Degree and attended college at Alma College in Detroit, Michigan. She was also a graduate of the Tennessee Technology Center in Hartsville.

On December 10, 1948 she was united in marriage to Stonewall Community native Herlin Carter who preceded her in death on June 23, 2000 at the age of 77.

Mrs. Carter was saved at the age of eleven and was baptized into the full fellowship of the Mt. Pilgrim Baptist Church in the Elmwood Community. Their she accomplished a host of achievements which included; the Youth Director, a member of the choir, President of the Missionary programs, served as church secretary for over thirty years, was on the building and kitchen committee, was a Primary class Sunday School teacher, was a church Deaconess and was voted woman of the year in both 1975 and 1985 and received an award for serving as President of the Women’s Society for thirty one years.

She perhaps will be remembered by the senior Smith County residents as a clerk at the former Lawson’s Department Store in Carthage.

She was a retiree from the former New Jersey Zinc Co. where she was a weigh clerk.

A life well-remembered, she will be sadly missed by all her family and the multitude of friends with whom she came in contact with.