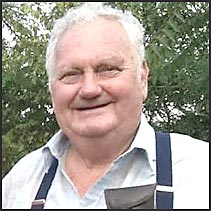 Mr. Charles Edward Scudder, age 85, of the Grant Community in Smith County, TN, passed away at his home on March 31, 2019 after diagnosis with a serious illness.

Born December 24, 1933, in Carthage, TN, a son of the late Clarence Edward “Mutt” Scudder and Winifred Carpenter. Charles took an active role in the family’s livestock-hauling business. As a teen, he was especially proud of his ability to back a long stock-truck directly in front of the livestock-loading chute. Charles graduated from Gordonsville High School in 1953. While in high school, Charles excelled at football and in 1953, he was named All Mid-State Defensive Lineman. That same year, Charles received a written invitation from General Robert Neyland to try out for the University of Tennessee Football team.

Charles began working for the Middle Tennessee Electric Membership Cooperative (MTEMC) in 1953. He remained at MTEMC for 46 years, developing many lifelong friendships. Charles began his career at MTEMC as a Groundsman and retired as a Labor Foreman in 1999.

Charles was a member of the New Middleton United Methodist Church.

Charles enjoyed his retirement. An avid outdoorsman, he delighted in fishing with his granddaughter; Samantha, in the pond on the family farm, trying to snag the ever-elusive “Josey Whale.” A dedicated deer hunter, Charles never bagged the trophy he dreamed of, but he could spin many tales of “the one that got away.”

Charles will be dearly missed by his family.

Funeral Services for Mr. Scudder are scheduled to be conducted at the Gordonsville Chapel of Bass Funeral Homes on Friday, April 5, 2019 at 1PM with Bro. Dickie Johnson officiating. Interment will follow in the Gordonsville Cemetery.

Visitation with the Scudder Family will be at the Gordonsville Chapel of Bass Funeral Homes on Thursday from 4PM until 8PM and on Friday after 11AM until service time at 1PM.

In lieu of flowers, the family requests you make a donation to the charity of your choice.