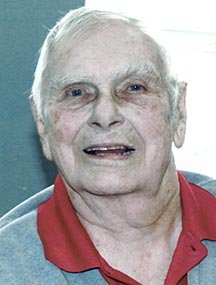 Mr. Hunter was born January 19, 1926, in Bluff Creek, TN, a son of the late Howard Robert Hunter and Verna Harper. He married Katherine Ruth Ballinger Hunter on July 6, 1948 and she preceded him in death on January 13, 1998. Mr. Hunter was also preceded in death by infant brother; Jimmy Fate Hunter on February 1, 1933.

Mr. Hunter graduated from Gordonsville High School in 1944. He served his country in the U.S. Army during World War II. Mr. Hunter was a member of the Gordonsville United Methodist Church and the Southside Lions Club. He worked for the Tennessee Department of Transportation for 43 years until his retirement in 1999.

Funeral Services for Mr. Hunter are scheduled to be conducted from the Gordonsville Chapel of Bass Funeral Homes on Monday, April 1, 2019 at 2PM with Bro. Dickie Johnson officiating. Interment will follow in the Ridgewood Cemetery.

Visitation with the Hunter Family will be at the Gordonsville Chapel of Bass Funeral Homes on Sunday from 1PM until 6PM and on Monday after 12PM until service time at 2PM.

Mr. Hunter’s family request memorial donations in his memory be made to Chad’s Run.