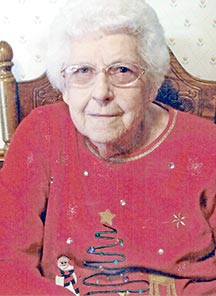 Mrs. Robbie was born July 12, 1925, a daughter of the late Robert Moss and Emma Maynard Moss. She married Hugh Miller Gass on April 3, 1953 and he preceded her in death on July 16, 1994. She was also preceded in death by Brothers; Grady Moss, Wilson Moss, Dewey Moss, Howard Moss, and James C. Moss, and Sisters; Era Petty, Jess Hall, Fannie Bell Parkerson, and Irene Crawford.

Mrs. Gass worked at Alexandria Garment and Manufacturing. She was a longtime member of the Brush Creek Baptist Church.

Funeral Services for Mrs. Gass are scheduled to be conducted from the Gordonsville Chapel of Bass Funeral Homes on Wednesday, April 3, 2019 at 1PM with Bro. Donald Franks officiating. Interment will follow in the Brush Creek Cemetery.

Visitation with the Family will be at the Gordonsville Chapel of Bass Funeral Homes on Tuesday from 2PM until 8PM and on Wednesday after 10AM until service time at 1PM.