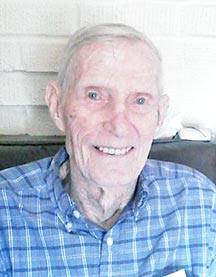 Mr. Ed White age 91 of South Carthage died peacefully from complications from a stroke at 10:59 a.m. Monday morning April 23, 2019 at the Pavilion in South Carthage with his family at his bedside.

His pastor, Bro. Scott Ezell, and his longtime former pastor, Bro. Ray Gomer, officiated at the 1 p.m. Friday afternoon April 26th funeral services from the Carthage Chapel of Sanderson Funeral Home. Burial followed beside his wife in the Garden of the Cross at Smith County Memorial Gardens.

In addition to his enjoyment of farming, he retired from the E.I. Dupont Co. in Old Hickory with over twenty years of service.

Mr. White proudly served our country with the United States Army during the Korean Conflict which was officially ended June 19, 1953. He was inducted on October 23, 1950 and was honorably discharged on July 23, 1952 with the rank of Private First Class.

Mr. White was a member of the Carthage Church of Nazarene.