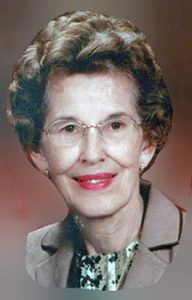 Mrs. Flora Caplenor, age 87 of the Flat Rock Community, died at the Rutherford Assisted living in Murfreesboro at 1:05 a.m. Wednesday morning May 1, 2019.

Funeral services from the Ligon & Bobo Funeral Home in Lebanon were conducted on Friday afternoon May 3rd at 1 p.m. with Bro. Jimmy Gregory and Rev. David Hesson officiating. Burial followed beside her beloved husband, Billy, of almost sixty four years in the Wilson County Memorial Gardens.

It was only fitting that she was born on Valentine Day 1932, that she would lead a life that demonstrated unlimited love to all she met and to all who knew her. Her love for her fellow persons was exhibited each day she spent upon this earth.

On April 7, 1951 she was united in marriage to Flat Rock Community native William Everette “Billy” Caplenor who preceded her in death on January 18, 2015 at the age of 85.

Mrs. Caplenor was a 1949 graduate of Smith County High School where she majored in Home Economics, was the Future Farmers of America Queen her sophomore year, and her senior years was a member of the Black & Gold Staff and the Press Club.

Also her future husband and high school sweetheart, Billy, was Captain of the “49 Owls Football team and she was the Football Queen in 1949.

Her favorite hobbies included traveling, reading, sports and she and her husband were longtime, what they referred to as modern campers, at Lake Tansi Resort in Crossville.

Mrs. Caplenor was a faithful member of the Rome Baptist Church and for fifty two years before her retirement she served as the church secretary of the Lebanon First United Methodist Church.

Surviving is her sister, Joann Dawson Hensley of Lebanon, brother, Hilary Dawson and wife Barbara Wilmore Dawson of Shelbyville; special sisters-in-laws who were her neighbors, Geraldine Caplenor Reich and husband B. J. and Jean Kemp Caplenor all of the Flat Rock Community; fifteen nieces and nephews; several great nieces and nephews that she loved as though they were her grandchildren. She was the beloved “Nana Flora”, known as a grandparents to her cherished Reagan and Eli.