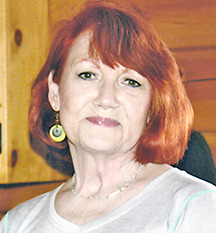 Mrs. Rita Boles Lankford, age 69, a homemaker of Murfreesboro, died at 1:13 a.m. Sunday morning May 12, 2019 at the St. Thomas West Hospital in Nashville after suffering a fatal brain aneurysm at her Maymont Drive home in Murfreesboro around 4:30 p.m. Saturday afternoon.

Funeral services were conducted from the Woodfin Memorial Chapel in Murfreesboro on Wednesday afternoon May 15th at 1 p.m. Eulogies were delivered by her brother-in-law David Allen Lankford and by Jacky Carver Sr. Burial followed in the Boles family lot at the Hillview Memorial Cemetery in Alexandria with Mrs. Lankford’s nephew, Casey Lankford officiating.

She was born Rita Pearl Boles in Livingston in Overton County on November 28, 1949 and was one of three children of Georgia Rebecca Swann Boles of Alexandria and the late World War II veteran Alfred Lawrence Boles who died August 16, 1999 at the age of 78.

At the Brush Creek Church of Christ on July 8, 1967, she was united in marriage to Defeated Creek Community native Wayne Patrick Lankford. The ceremony was performed by Church of Christ minister Charles White.

She graduated from the Gordonsville High School with the class of 1968.

Mrs. Lankford was a member of the East Main Church of Christ in Murfreesboro where her husband has been the pulpit minister for almost twenty five years.

She retired in 2013 as secretary to the Guidance Counselor at Riverdale High School in Murfreesboro.

She loved her family, was totally committed to her hobby of scrapbooking and loved to travel.

On their 51st anniversary to celebrate their 50th anniversary, they made a trip to Spain. They had also traveled to Alaska, South America, Turkey and to Greece where they visited the sites of the seven churches of Asia.