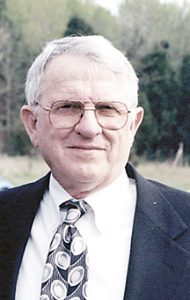 Mr. McKee was a member of College Hills Church of Christ serving on the communion and edification teams and as a greeter. He helped with the community garden and for many years he was responsible for locking up after everyone left on Sunday and Wednesday nights. He and his wife were also the recipients of the Homecoming award. He was a farmer and was owner and operator of several service stations. He and his wife operated the Handi Market in Gordonsville, home of Tennessee’s first broasted chicken. Mr. McKee was a former Smith County Commissioner, a member of Gordonsville Volunteer Fire Department and a founding member of Gordonsville Church of Christ. He also served as president of Southside Lion Club and Smith Utility District.

The family would like to recognize Sherry Winfrey, dear friend to James.

This notice provided as a courtesy to the McKee Family.