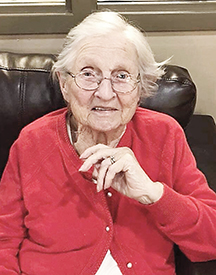 Mrs. Trusty was born August 31, 1925 in the Long Branch Community of Dekalb County, TN, a daughter of the late Johnny Lloyd Fish and Bonnie Beulah Malone Fish. She married Ewin Trusty and he preceded her in death on February 11, 1988. She was also preceded in death by Son-in-Law; Toney Glenn Maynard on May 17, 1995, Two Sisters; Juanita Winfree and Jim Neva Self, and One Brother; Gordon Fish.

Mrs. Trusty had worked for the shirt factories in Carthage, Alexandria, and Smithville. She attended the Gordonsville Nazarene Church and was a Lifelong Member of the Long Branch United Methodist Church.

Funeral Services for Mrs. Trusty are scheduled to be conducted from the Gordonsville Chapel of Bass Funeral Homes on Wednesday, June 19, 2019 at 1PM with Bro. James Lee Williams and Bro. Shane Smith officiating. Interment will follow in the Gordonsville Cemetery.

Visitation with the Family will be at the Gordonsville Chapel of Bass Funeral Homes on Tuesday from 1PM until 8PM and on Wednesday after 10AM until service time at 1PM.