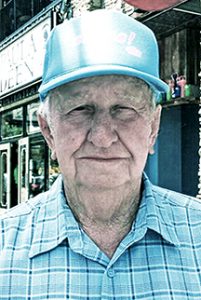 Mr. Harold “Da Da” Huffines of the Rock City Community died at 7:05 a.m. Monday morning July 29, 2019 at the Hartsville Health and Rehabilitation Center suffering from dementia. Mr. Huffines was 83 and was under the care of Aseracare Hospice of Nashville.

A Celebration of Life was remembered from the Carthage Chapel of Sanderson Funeral Home on Wednesday morning July 31st at 11 a.m. Sis. Alline Proffitt Smith delivered the prayer and family reflections were by his granddaughter Jessica Proffitt Ramsey. Burial was beside his wife Dimple at the Draper Cemetery in the Wartrace Creek Community of Jackson County.

He was born Glenn Harold Huffines in the Wartrace Creek Community on February 23, 1936 and was the older of two children of the late Golman Herman “G. H.” Huffines who died May 5, 1987, one day before his 75th birthday and Mary Lou Wilkerson Huffines-Lynch who died June 12, 2011 at the age of 94.

He was preceded in death by his sister, Jo Ann Huffines McKay-Cardwell on January 21, 2012 at the age of 70.

On July 15, 1959 at the Wilson County Courthouse he was united in marriage to Temperance Hall Community native, the former Dimple Dean Corley. Mrs. Huffines preceded him in death on October 17, 2016 at the age of 77 following over fifty seven years of marriage.

He was of the Pentecostal faith.

The Huffines family has requested memorials to the Draper Cemetery Mowing Fund.