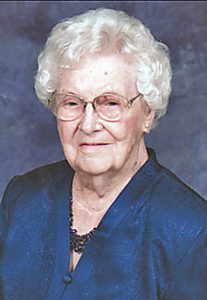 Mrs. Alberta Enoch Oakley, a centenarian of the New Middleton Community, was called home to be with her Lord at 5:07 p.m. Friday afternoon July 26, 2019. She died just nine days before her 102nd birthday at the Smith County Health and Rehabilitation Center in Carthage where she had made her home since January 22, 2016.

Funeral services from her beloved New Middleton Baptist Church, were conducted Sunday afternoon July 28th at 3 p.m. with her pastor Bro. B. J. Thomason and her former pastor Bro. Mark Stinnett officiating. Burial was beside her husband Ben at the Brush Creek Cemetery.

She was preceded in death on September 2, 1994 Ben William Oakley, a native of the Commerce Community, who died at the age of 79. They were united in marriage by the late Eld. Phocian Gibbs on July 18, 1936.

Mr. and Mrs. Oakley were preceded in death by a daughter, Celia Oakley McDonald who died when she was hit head on a head-on on Hwy. 25 at the age of 35 on January 8, 1976 when she was on her way home from her employment as a tax preparer at the Smith County Farm Bureau.

Mrs. Oakley was also preceded by in death by Stites and Nancy’s son, Chris Carter, who died of complications from surgery on August 27, 2006 at the age of 38.

Mrs. Oakley was united with the New Middleton Baptist Church in 1951 and served as the church organist for over many years, taught and was active in youth groups at the church and was a teacher of the Adult Sunday School class. She was also active in the teaching for Vacation Bible School sessions and was a member of the Women’s Missionary Union. Also for several years she was secretary for the church finances.

She was a member of the 1935 class of Gordonsville High School.

Active in community and civic endeavors, Mrs. Oakley was a longtime member of the New Middleton Home Demonstration Club.

The Oakley family requests memorials to either the Chris Carter Scholarship Fund or the New Middleton Baptist Church Growth Fund.