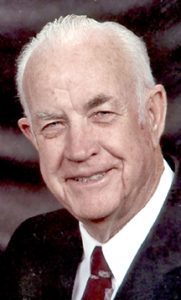 Mr. Charles E. Hall, age 90 of Lebanon, passed away peacefully at his home on August 26, 2019.  He was born in Smith County, TN in 1928 to the late John B. and Lillian Grandstaff Hall.  Charles graduated from Gordonsville High School in 1947, and went to work for the Cumberland Falls Feed Mill in Gordonsville.  In 1951 he enlisted in the United States Army where he served and was honorably discharged in January of 1953.  He began his studies in Business Administration in 1953 at MTSU and then later in life attended the University of Tennessee.  In 1958 he began working as the Assistant VP of Savings for First Federal Savings and Loan in Nashville and then later went on to work at Mid-State Educators Credit Union from which he retired. After retirement he worked for Advanced Tax & Income Service filing taxes for the public.  He was married to Mrs. Willette Hudson on November 5, 1955 and shared 63 wonderful years together until her passing on December 22, 2018.  Charles and Willette loved to shop for “treasures” and he was very proficient in working with antique furniture and refinishing fine wood furnishings.  It was a hobby they both enjoyed and they spent many hours traveling together shopping at sales and auctions for things to “fix up”.  He was a member of Westland United Methodist Church.

In addition to his parents he is preceded in death by his wife, Willette Hudson Hall; and a sister, Alene Sykes.

He is survived by a host of extended family and friends and “Special Family” friend and loving caregiver, Nan Winfree.

Funeral services will be Saturday August 31, 2019 at 2PM from the Chapel of Ligon & Bobo Funeral Home.  Rev. David Hesson will officiate and interment will follow in the Wilson County Memorial Gardens.  Visitation will be on Saturday from 12 Noon until Services at 2pm.

In Lieu of Flowers memorial contributions may be made to the Wounded Warriors Project which may be mailed to PO Box 758517 Topeka, Kansas 66675-8517.