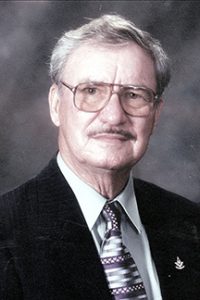 Mr. James “Smokey” Sanders, age 86 of the Ballinger Road Community, died at 4:05 p.m. Sunday afternoon September 1, 2019 at the St. Thomas West Hospital in Nashville where he was admitted Friday August 31st being treated for pneumonia.

He was born James Albert Sanders in Elmwood on March 1, 1933 and was the son of the late James C. “Jim” and Addie Leona Proffitt Sanders.

At the former South Carthage Pentecostal Church (now the Abundant Harvest Worship Center) on July 14, 1982, he was united in marriage to Buffalo Valley Community native, the former Martha Boyd. The ceremony was performed by the late Eld. Lewis Sandlin.

In 2018 they were preceded in death by a great-granddaughter, Hattie Grace Sanders, who died at birth.

Mr. Sanders was an accomplished truck and bus driver having driven for Thurston Motor Lines, later Brown Transport for twenty one years, for K & K Trucking in Gordonsville for fifteen years from 1979 until 1994 and was employed by the Smith County School System where he drove a school bus from 1995 until retiring in 2014, with a career that spanned over fifty five years.

He was a 50 year plus member and Past Worshipful Master of the Carthage Benevolent Lodge # 14 of Free and Accepted Masons, a 32 Degree Mason and member of the Al Menah Shrine Temple in Nashville.

At the Carthage Masonic Lodge on February 7, 1962 he received his Entered Apprentice Degree was passed to the degree of Fellowcraft Mason on March 27, 1962 and was raised to the sublime degree of Master Mason on April 24, 1962.

He was a member, former Elder and presently served as a Trustee of the Abundant Harvest Worship Center in South Carthage.

Mr. Sanders proudly served our country with the United States Navy during the Korean War. He was inducted in Nashville on October 11, 1950 and was honorably discharged on December 8, 1953 at the Naval Receiving Station in San Francisco, California. His total service was three years, one month and twenty eight days of which one year and nine months was in the Marshall Islands.

For his meritorious service he was awarded the National Defense Service Medal, a Good Conduct Medal, a Korean Service Medal and the United Nations Medal.

The Sanders family requests memorials to the Shrine Burn Center.