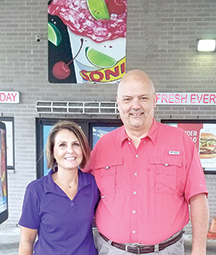 (Sherry’s Run, a Wilson County benefit, is being held in honor of a Smith County couple.)

You don’t have to spend much time with Todd and Diane Smith to see what quality has gotten the couple through the recent string of trials they have faced together: joy. Todd and Diane both have smiles that brighten the room, and their engaging personalities make you feel immediately at ease. The Pleasant Shade couple is well known for their involvement with several local Sonic restaurants, with Todd managing the West Main location in Lebanon, and Diane in Carthage. The abounding joy they exude would never hint of the battles they both have recently waged for their health.

Despite receiving clear mammogram results in October of 2012, Diane found a lump in her breast in December of that same year. After a biopsy confirmed a cancer diagnosis, she began treatment in February of 2013. Diane continued to work throughout her treatments and maintained a positive attitude despite her diagnosis. “I wanted to show the kids at work that I could be there, despite not feeling well,” Diane says. Not one to let life get her down, Diane maintained a positive outlook and stayed active throughout her treatment, even wrangling a 42-pound fish by herself caught from the Cumberland River. “When I said I was too weak and my arms were too tired and I couldn’t do it, my family told me to just keep reeling!”

READ MUCH MORE IN THIS WEEKS CARTHAGE COURIER!