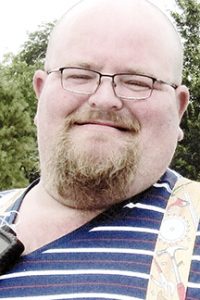 Mr. Raymond Lackey of the Russell Hill Community was pronounced dead at the age of 36 at 5:15 p.m. Monday afternoon September 2, 2019 at the Riverview Regional Medical Center in Carthage. His wife discovered him deceased and called Smith County E-911 at 2:47 p.m. Mr. Lackey suffered from chronic diabetes and apparently died from heart failure.

The second of five children born to Glenda Faye Hall Lackey of McMinnville and the late Lonnie Wayne Lackey Sr., he was born Raymond Wayne Lackey in Lebanon on February 14, 1983.

He was united in marriage to Defeated Creek Community native Angel Renee’ Washer on October 24, 2010. The ceremony was performed by Bro. Denzel Cherry at the Defeated Creek Park.

He was well known by many people because of his position at the self-checkout counters at the Carthage Wal-Mart. He had been employed there since 2010.

Surviving in addition to his mother and his wife of almost nine years are his father-in-law and mother-in-law, Bobby and Jada Sutton Washer of the Defeated Creek Community; two sisters, Diane Ferrell and husband Gary of McMinnville, Ruby Lackey of Manchester; two brothers, John Lackey and Lonnie Wayne “Bucky” Lackey Jr. both of McMinnville, brother-in-law and sister-in-law, Joey Washer and wife Stephanie of South Carthage; one niece and six nephews.