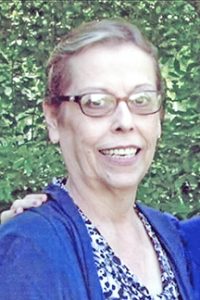 Mrs. Peggy Fisher Stanage of the Pea Ridge Community died at 1:27 a.m. Sunday morning September 15th at St. Thomas Hospital Mid-Town where she was admitted after suffering a debilitating stroke on Wednesday evening at her home. Mrs. Stanage was 59.

Funeral services from the Carthage Chapel of Sanderson Funeral Home will be conducted Wednesday morning September 18th with Eld. Rickey Hall officiating. Burial following the 11 a.m. services will be in the Garden of Everlasting Life at the Smith County Memorial Gardens.

The Fisher family will receive friends on Tuesday September 17th from 3 p.m. until 8 p.m. and again on Wednesday morning September 18th from 9 a.m. until services at 11 a.m. at Sanderson in Carthage.

Born Peggy Darlene Fisher in Carthage on February 12, 1950 at the former Thayer S. Wilson Clinic, (now Poindexter Reality), she was one of four children of the late Finis Burnette “Burr” Fisher who died at the age of 74 on August 11, 2012 and Lois Faye Hensley Fisher who died November 12, 2015, one day before her 73rd birthday.

At the Smith County Courthouse on January 8, 1981, she was united in marriage to Mishawka, Indiana native Allen Louis Stanage.

She was preceded in death by two brothers-in-law, Tony Cummings who died in Pikeville, Tennessee on February 21, 1993 at the age of 47 and former Carthage City patrolman and Smithville resident Roger Schaffint who died December 28, 2018 at the age of 64.

Mrs. Stanage was an accomplished cook, an occupation she loved, and was employed in the dietary department of the former Carthage General Hospital until the closing and then was transferred to the Riverview Regional Medical Center’s dietary department where her total employment spanned a career of over forty two years.

Mrs. Stanage was of the Missionary Baptist faith.

Surviving in addition to her husband Allen, of over thirty eight years, is their daughter, Paige Stanage of Cookeville; two sisters, Rita Cummings of Carthage, Pam Schaffnit of Smithville; a brother, Les Fisher and wife Kim of Carthage’ several nieces and nephews.