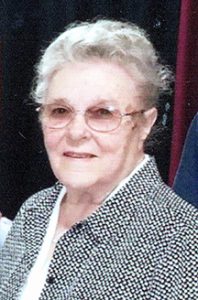 Her pastor Bro. Scott Ezell and her associate pastor Bro. Clay Tincher officiated at the 11 a.m. Friday morning September 20th funeral services from the Carthage Chapel of Sanderson Funeral Home. Burial followed beside her husband in the Garden of Gethsemane at Smith County Memorial Gardens.

At the home of the late Eld. Phocian Gibbs on December 8, 1953, she was united in marriage to Club Springs Community native Raybern Bridges Glover who preceded her in death at the age of 74 on December 3, 1999.

Mrs. Glover was employed for seven years at the former Werthan Bag Co. in Nashville and retired from the former Carthage Shirt Corporation in 1985 with over thirty years of service.

As health permitted, she faithfully attended the Carthage Church of the Nazarene.