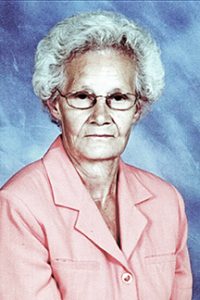 Mrs. Pauline Holland of the Bagdad Community died at the age of 77 at 7:30 a.m. Sunday morning September 22, 2019 at her Salt Lick Creek Road home surrounded by her loving family. She was pronounced deceased at 9:02 a.m. by Caris Hospice of Cookeville.

1 p.m. funeral services were conducted from the Hackett Chapel of Sanderson Funeral Home by her son-in-law, Eld. Jeff Burton on Tuesday afternoon September 24th. Burial followed in the Holland Family Cemetery in the Bagdad Community.

At the home of Robert Fox in Gainesboro on November 7, 1959, she was united in marriage to Bagdad Community native Lillard Patrick Holland.

Mrs. Holland attended Jackson County Central High School and her life work career was at the Carthage Shirt Corporation where she was employed until the closure in 1993.

She was a member of the Smith Memorial Methodist Church but for many years had attended the Bagdad Church of Christ, which was nearer her home.