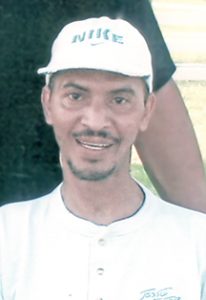 Mr. Jeff Carver of the Riddleton Community was discovered deceased at his Preacher Road home on Monday afternoon. He was pronounced dead at the Riverview Regional Medical Center in Carthage at 1:22 p.m. Mr. Carver was 59.

Although Jeff had been in failing health for some time he always was in a good spirit.

Funeral services from the Carthage Chapel of Sanderson Funeral Home were conducted Thursday afternoon at 3 p.m. with Rev. Norman Manning delivering the eulogy and Rev. Tony Clemons officiating. Burial followed beside his sister in the Rockvale Cemetery in Cages Bend in the Riddleton Community.

He was one of nine children of Elmwood Community native Henrietta Stewart Carver of the Riddleton Community and the late Willie Marshall “Mike” Carver who died at the age of 65.

Jeff was preceded in death by a sister, Brenda Cheryl Carver Carter who died June 12, 2003 at the age of 50.

Mr. Carver was a 1978 graduate of Smith County High School and of the Tennessee Technology Center in Hartsville where he received a degree as an electronics technician.

He was employed for many years as a repair technician for Shoulders T.V. in Carthage before becoming disabled in 1999.

Mr. Carver served our country during peacetime with the United States Army.

He accepted Jesus Christ as his Saviour at an early age and joined the Lily Hill Missionary Baptist Church in the Riddleton Community.

In addition to his mother Mr. Carver leaves to cherish his memory and mourn his passing four children, two daughters, Kenecia Sullivan of Murfreesboro, Samantha Carver Harris of Pulaski; two sons, Chris Carver and wife Sarah of the Riddleton Community, Shawn Carver of the Defeated Creek Community; four grandchildren, Kayleah Neal, Kayden Harris, Kyler Harris and Malia Campbell; five sisters, Beverly Means and husband Aaron of Charlotte, North Carolina, Barbara Sales of Hermitage, Becky Cameron and husband Willie of Nashville, Bridget Weir and husband Ray of Lascassas, Tina Carver Kittrell and husband Kendall of Cookeville; two brothers, Jimmie Carver of the Riddleton Community, Keith Carver and wife Nicole of Atlanta, Georgia; and a host of other relatives and friends who were all saddened by his passing.