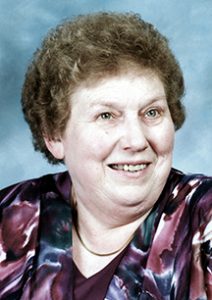 Mrs. Kathleen Perrigo Lankford of South Carthage died peacefully at the age of 85 at 2:40 p.m. Wednesday afternoon October 9, 2019 at the Smith County Health and Rehabilitation Center in Carthage where she had been cared for since September 14, 2018.

Her pastor, Eld. Junior Dickerson, officiated at the 11 a.m. Saturday morning October 12th funeral services from the Carthage Chapel of Sanderson Funeral Home. Burial followed beside her husband in the Garden of the Cross at Smith County Memorial Gardens.

Her sister, Geraldine Mae Perrigo McClanahan died at the age of 76 on March 31, 2003 and her brother, J. C. Perrigo, died as an infant.

Mrs. Lankford was a 1952 graduate of Smith County High School and was a member of the Future Homemakers of America, the glee club, music and band clubs.

She was united in marriage in Corinth, Mississippi to Smith County native Henry Alvis Lankford who preceded her in death on April 15, 1989 at the age of 54.

Mrs. Lankford was saved and baptized at the age of 17 at the Carthage First Baptist Church and later moved her church membership to the Plunketts Creek Missionary Baptist in the Rock City Community.

Mrs. Lankford retired in 2002 as kitchen manager for the Upper Cumberland Human Resources Authority kitchen program at the Smith County Senior Citizens Center where she was also a member.