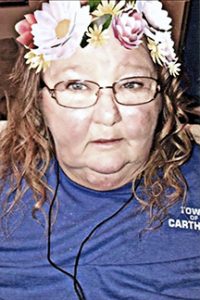 Mrs. Glinda Robertson Ramsey, of Carthage, died at her McClarin Court home at the age of 59 at 3:06 a.m. Wednesday morning October 16th following a period of declining health.

Friday afternoon October 18th funeral services from the Carthage Chapel of Sanderson Funeral Home were conducted by her pastor, Bro. Jamie Duke. Burial followed the 1 p.m. funeral services in the Garden of Everlasting Life at the Smith County Memorial Gardens.

The Robertson children were reared at the corner of College Avenue East and Skyline Drive in a home that was removed and the land is now a part of the Garden of Everlasting Life at Smith County Memorial Gardens.

She was an employee of the former Texas Boot Co. in Carthage.